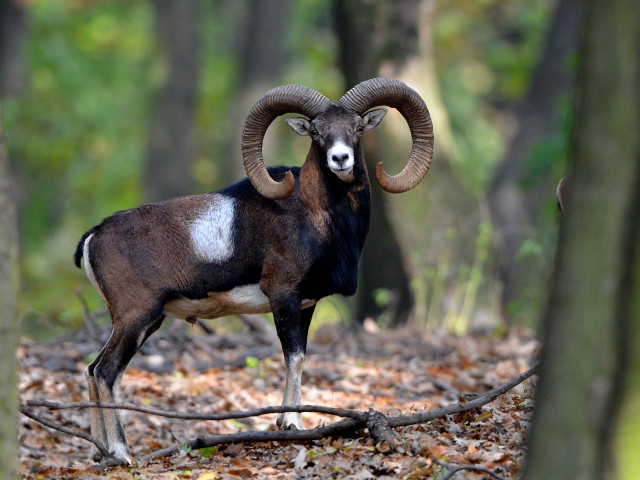 This species is non-native to Hungary, it originates from the islands of Corsica and Sardinia and it was introduced to Europe from there. The first specimens in the Carpathian-basin were settled in 1868 in Gyimes, Nyitra county. From there it got to the area of current Hungary to Füzérradvány in 1901. It is present everywhere in the mountainous areas of the country.

After introduction its most important populations in Hungary live in the Mátra, the Buda-mountains, the Börzsöny, the Bükk, the Pilis and the Vértes, as well as the Zemplén-mountains. The height of our mountains are optimal for mouflons. They like hard, rocky soils and older forests where they have good visibility while grazing. They prefer deciduous forests but it is important for them to find dry rocky soils for the wearing off of their trotters.
Since they live in mountainous regions good stamina is needed for their hunt.

The trophy is the pair of horns worn by rams which grows continuously and can reach a lenght of 100 cm and sometimes the circumference of 24 cm. The years can be distinguished on the horn thanks to the periodic growth and there are linings between the growth rings. Based on that the age of rams can be defined.

The hunting season starts with the 1st of september. The rut goes from mid-october to the end of december. It is a great experience to take down the desired ram during the rut.

The most common hunting method for mouflons is stalking. Hunting from a vehicle seldom gives a result and only on appropriate grounds. Hunting from high stands can be sucessfull around game fields. Besides wild boar this species is also common in hunting reserves.