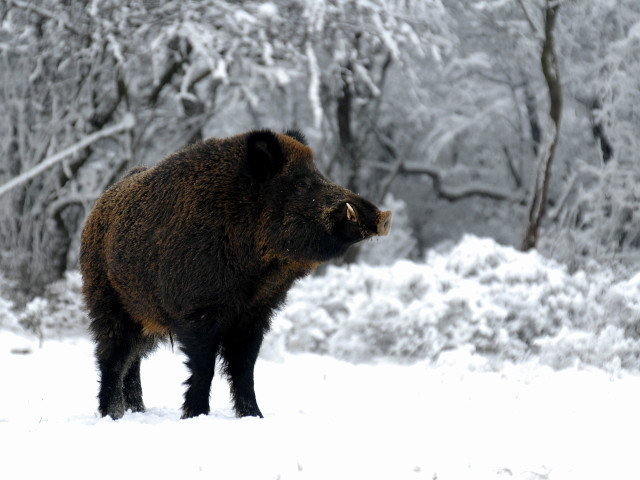 The only european member of the Suidae family is wild boar which is also present in Hungary; it is native in Europe, Asia, and the northern part of Africa but it was also introduced to North- and South-America.

The game species with biggest numbers in Hungary lives mostly in Transdanubia and the Northern Mountain Region but it is present in growing numbers on the Great Plains as well. Its habitat is mainly deciduous forests with swamps, thick underbush and wet soils. They can also be found in conifer forests, shrub areas and reed-plots. Currently their growing appearance in human settlements are causing bigger and bigger problems. Their daytime resting place during the vegetation period can often be found in big corn or sunflower fields and if they find water there as well they are not leaving until harvest. They also like fields and meadows after rain where they search for invertebrates.

Trophy of the wild boar: its very much developed tusks or eye-teeth. Two of the first five boars on the world rank list were taken down in Hungary and the current world record was shot in Budakeszi, Hungary as well.

If hunted individually the use of high stands is the most popular which is the most beautiful in snow at moonlight. It is a very rare and tiresome method to do tracking when we try to follow fresh dawn tracks and surprise the boar on its resting place. The exceptional hearing and smell accompanied by the high intelligence of the boar promises an interesting hunt for all hunters.
The pitch of wild boar hunt is a driven hunt. It is usually organized for 20-25 hunters with the help of numerous beaters and dogs. For smaller groups a baffle hunt is also preferred. In some areas also red hinds, fallow does, calves and fawns can be shot. This hunt is organized in several smaller areas without dogs.
Driven hunts are usually also organized in hunting reserves, where the daily bag can reach 80-100 specimens.