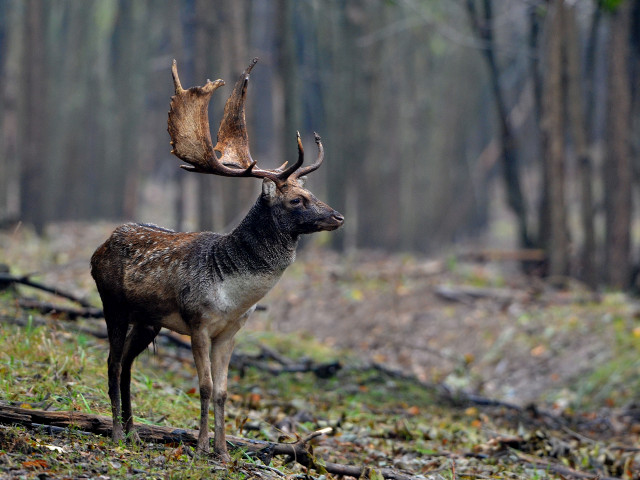 Fallow deer was once native to Hungary but it got extinct in the ice age. Thanks to reintrocduction it is present again to Hungary and it adapted very well to its natural environment.

There are populations of great numbers around Gyulaj, the Upper Tisza-region, as well as in Somogy and Békés counties. It mostly prefers deciduous forest patches divided by agricultural fields of flat or slightly hilly lands.
The most excellent is the fallow deer of Gyulaj which gave numerous world records and became a notion over the centuries. Over the last several years another fallow deer population evolved around Guth in the North-Eastern part of the Great Plains which boasts world records as well.

Fallow deer is primarily hunted in october during rut. At that time its voice is very typical, like a snort. The buck digs a rutting-bowl and waits for the does there. The specificness of this species is that the doe chooses the buck to mate with. Dominance fights between bucks are about the best places within a rutting area. Hunting for weaker bucks is done after the rut from november to february.

The most beautiful way to hunt for fallow bucks is stalking or vehicle hunting. During the rut fallow deers are active all throughout the day so there is a good chance to hunt for the bucks in heat. Hunting for weaker bucks and does is done after the rut. Many hungarian game reserves deal with fallow deer to enhance their hunting possibilities.